I Saw God in a Smashed Banana 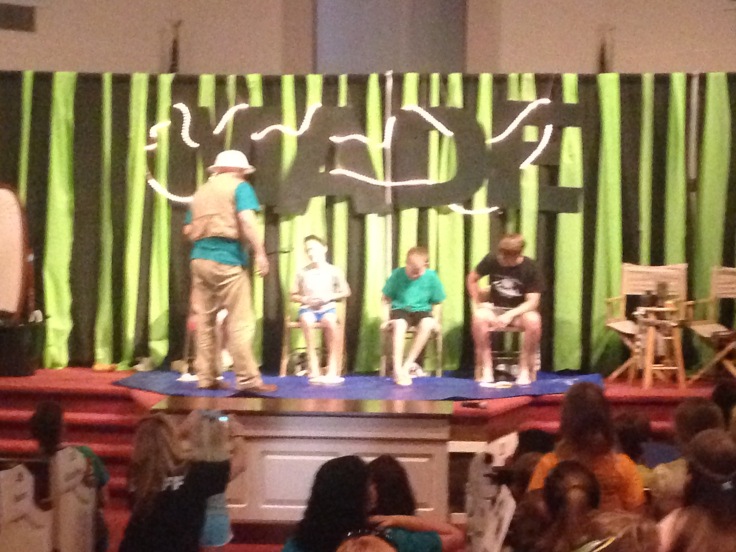 This picture is hard to see, so allow me to explain it…

Our church hosted Vacation Bible School this week. Each morning, we began with a Wake-Up/Worship Rally. One morning, Pastor Steven called four kids up on stage to peel a banana with their feet (one of which was my son). After all four bananas were peeled, he picked up one that endured a lot of smashing (aka direct foot contact).

He then preceded to issue a challenge, and asked how many leaders were in the rally, which was about twenty. He asked if we would agree to a challenge of raising $200 for missions, and he would eat that smashed banana. We accepted the challenge and agreed to have at least $200 at the start of tomorrow’s Wake-Up/Worship Rally. (Note: this is totally different from the participant’s offering money…this challenge was for leaders only.)

Knowing that Steven is a fellow germophobe, I thought for sure there was a twist in this challenge. I just *knew* that he would not eat that banana.

He ate *that* banana. I have no picture of it because ALL my efforts in that moment went to suppressing my gag reflex.

I thought to myself:
“What is HE doing?!?”
“Is he CRAZY?!?”
“Has he EVER trimmed his child’s toe nails?!?”
“Is he aware of what utter grossness lurks underneath a boys’ toe nails?!?”
“Why would he WILLINGLY do this?!?”

Then I thought back to a Sunday School lesson on First Thessalonians from two weeks ago where we saw that Paul WILLINGLY suffered for the gospel. Did Paul eat a nasty banana? No, of course not, but Paul was beaten, jailed, and driven out of cities all for the sake of the gospel.

Does sharing the gospel take money? Let’s look back in Paul’s day at 1 Thessalonians 2:9 for our answer:

“For you recall, brethren, our labor and hardship, how working night and day so as not to be a burden to any of you, we proclaimed to you the gospel of God.”

While in Thessalonica, Paul worked for his own support to not be a burden on those whom he was there to share the gospel with. That took working for money. We are in the midst of a huge outreach event, and it also takes money, resources to pull off.

I’ve been thinking about “The Banana Episode” since it happened, all the while suppressing that reflex. I’ve asked myself, could I do that?! COULD I have eaten *that* banana? Could you?

This is how a saw God in a smashed banana….the love for missions from a servant heart.

I saw God every time a teacher comforted an upset child upon mom/dad’s departure.

I saw God in a volunteer who missed a summer school class to be with a child, since she really “spoke this child’s language”. Not in a language barrier situation, but rather, she knew EXACTLY what he needed in each moment.

I saw God in someone who was such an encourager, it helped me get going each morning. My job was large group bible study leader for preschool age and a “fire fighter”, as I would put out fires as they arose. This encouragement was something I looked forward to each morning.

I saw God in the sacrificial time that several volunteers gave up by driving two hours each day to volunteer. One of these volunteers was even one-armed, as he had shoulder surgery recently.

I saw God in youth helpers and volunteers’ children who helped out so much and modeled what it is to serve with a happy heart.

I saw God in childrens’ faces when they heard about God and His love, perhaps for the very first time.

I saw God in a volunteer who would go to the prayer room to pray between tasks in the day.

I saw God in a children’s minister who worked so very hard to pull this week off. We are so very blessed to have an amazing self-sacrificing kidmin leader!

I saw God in adults who willingly threw themselves down a slip-n-side to the delight of several children!

I saw God in each donation that came in…supplies, food, water bottles.

I saw God in the photographer who worked to freeze moments in time to remember and look back.

I saw God in a nurse who showed such compassion over each boo boo.

I saw God in volunteers who changed diapers. Bless them, Lord, bless them.

I saw God in volunteers who came each day, despite the pain named Migraine, and other painful ailments.

I saw God in so many places that I catch a bubble in my throat each time I reflect over the week. I don’t know why this year seemed so different compared with my 18 other years of serving at VBS, but it just was. It was not only me who felt this way, it was felt this way by many others. (It was also the fastest clean-up EVER, due to so many helping hands!)

I’d have to say otherwise.

I saw His hands, His smile, His feet, His love…HIM…throughout this entire week!

And my heart is so full.