Approaching this past race weekend, my husband and I knew our twins would learn a new level of perseverance if we/they/their coaches allowed them to race.

Avery, our daughter, caught her bike handlebars on a tree during practice earlier that week, causing soft tissue damage to her right wrist. She was put in a brace to wear at all times for the next 2 weeks. She was cleared to ride, according to her comfort level, as it was cautioned that she would be in some pain until it healed. This girl rode an amazing race for having pain and being in a brace. She was even up and off her saddle fighting all the way through the finish line, despite throbbing pain. She is a fighter and it showed!  I was extremely grateful she finished her race with no injuries!

Aiden, our son, was dealing with an upper respiratory illness that was causing something I can best describe as seasonal allergy-induced “asthma”. Whatever this was, it caused a reaction that mimicked rapid-fire short hiccups for a short spell of time. He would behave as if he was sucking air while his shoulders and upper body shook like one does with hiccups. It was scary and bizarre.  Thankfully, he had one of these episodes in the pediatrician office earlier that week. To get it to stop, Epinephrine was put into a nebulizer, which worked immediately. His chest was clear, all seasonal-allergy symptoms were post-nasal and he was prescribed meds to help clear it up. Had we known what would happen during the weekend, we would have requested an inhaler.

Since the race was out of town, we camped at the venue for the weekend. Being in a freshly cut field proved troublesome for Aiden’s allergies. Friday night at the team campground area, he had a couple “attacks”. It was advised by his coaches to take Saturday to rest and work on feeling better, instead of pre-riding the course. Another family, who also camped, allowed us to borrow their inhaler to see if it would help Aiden. This worked wonders and we were so very thankful! The plan was for Aiden to use the inhaler just before his race to keep any issues at bay. He felt like a new kid the rest of the day and he looked forward to racing.

At race time, we did as planned, then placed the inhaler in Aiden’s pack just in case he needed it. We assured him to ride as he felt comfortable and to come off the course if any issues arose.

The venue proved difficult for this mama, as it was long and narrow. This meant that from the start line to the depth of the course, he would be miles away, versus other venues that are not as deep into the woods away from the start. Two 4-mile laps are required for his age group, and when we saw him heading into his 2nd lap, he looked good, but had some coughing going on. As he passed by, I settled into another period of waiting that I promise you, took years of my life!

As Aiden approached the finish line, he looked rough, but was still pedaling. As he came off the race course, he said to a fellow rider (named Cameron), “it was a pleasure riding with you,” before he let a coughing fit take over.

After cooling down and doing the inhaler, I asked Aiden why he said that to the other rider.  And….wow, just wow! Here is Aiden’s account:

“I was coughing and having trouble riding. During one of my coughing fits, I ran into Cameron by crashing into him, causing us both to fall (my bad). Cameron heard me coughing and offered to ride to the nearest Course Marshall to get help. I told him not to go and that we could finish the race. We kept on riding on and almost every time I had a coughing fit, Cameron said encouraging words to keep me going to the finish line. He told me,

‘We’re almost there, it’s the final stretch’ and

‘Just think of the ice cold water back at your team’s tent’.

I could not have done it without him.”

I cried. I did not know who this kid was but I was already thanking God for him!

I asked Aiden, “Who is this rider? What team is he with?”

Aiden responded, “I do not know, but I know his number and I will find him to thank him appropriately. His number is 802.” 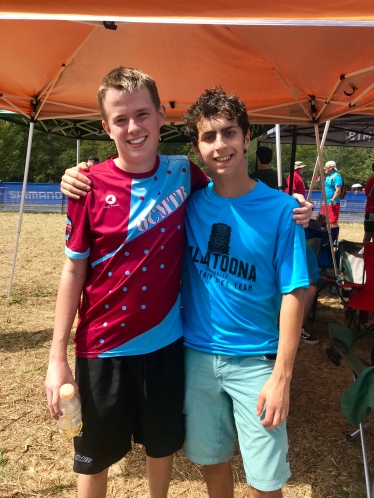 After finding out his name and team, Aiden, his dad, and I approached the team tent for Allatoona. We asked if they had a rider 802, and if his parents were around, explaining that we needed to express our thanks. I told his dad through grateful tears how much I appreciated what his son did for our son and I asked Cameron if I could hug him. God bless this sweet child for letting this strange mom hug him and share my complete gratitude. Aiden thanked him as well and we got their photo together. Later on, Cameron’s dad sent me a picture from the race before knowing the story. It showed Cameron right in front of Aiden leading him to the finish, just as Aiden described. 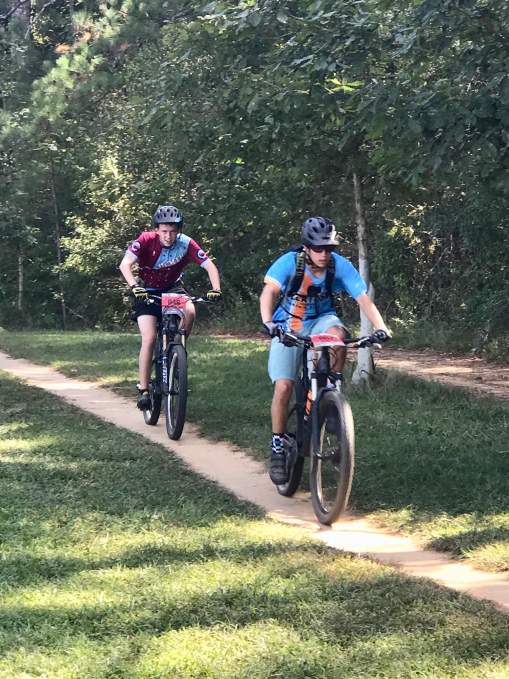 In a day and age where it seems like everyone is looking out for “number one” it is so refreshing to know there are kids like Cameron out there. Cameron has no idea how much I have thought about his gesture and what it taught me.

Cameron’s action taught me when people in life “crash into me,” I have a choice. I can choose compassion as he did, or I can choose competition, moving on, without bringing the offender with me. He modeled that how we run our race of life is much more important than our status/ranking/placement at the finish. Cameron issued a great reminder that there is good out there, even when there are times where it seems like good cannot be found.

This mom is forever grateful that compassion was chosen over competition; that someone laid his race aside to help my son. In my book, he is the 1st place finisher!

Thank you, Lord, for Cameron Fegan!

“Therefore, since we have so great a cloud of witnesses surrounding us, let us also lay aside every encumbrance and the sin which so easily entangles us, and let us run with endurance the race that is set before us, fixing our eyes on Jesus, the author and perfecter of faith, who for the joy set before Him endured the cross, despising the shame, and has sat down at the right hand of the throne of God.”

*Story and name shared with permission.